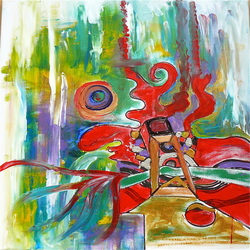 The second part was freedom within freedom. It also did not lend itself for contours. There was mystery, there was listening and hearing, there was change and amazement at the so much more that comes from having no rules or regulations. 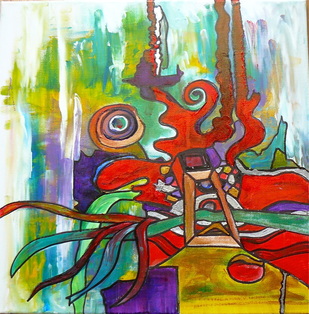 Dream Concert January 2014 final: The Path
And all of it was a reflection of the music and of the way the musicians were playing.

There are no musical agreements at the Dream Concerts, everyone plays what they feel and what inspires them.
Sometimes a known melody appears - freedom within a known tune - and than it disappears ..

Sometimes someone just plays music on all known and unknown instruments :-) During the time was made, there was percussion on the walls, on the trumpets and on the heating elements :-)

This is what came up in the painting, also.